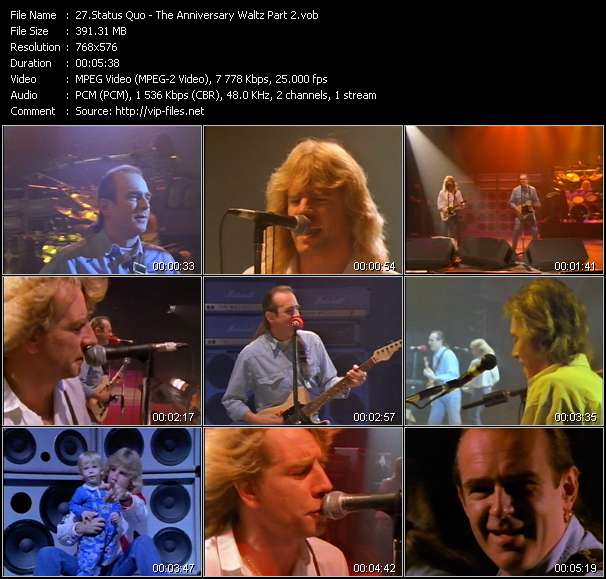 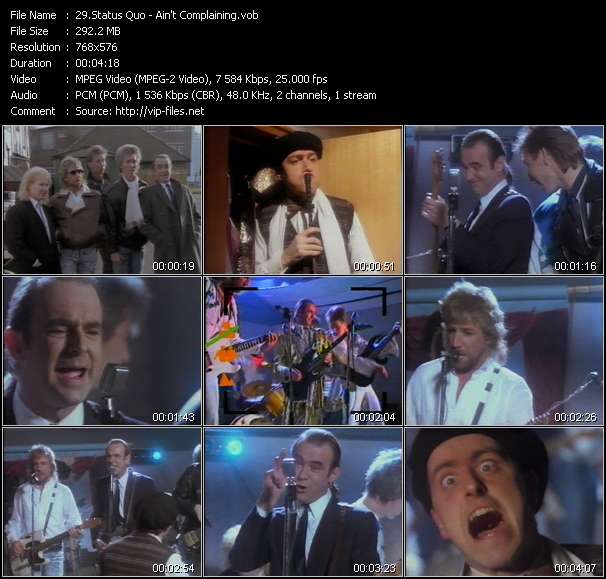 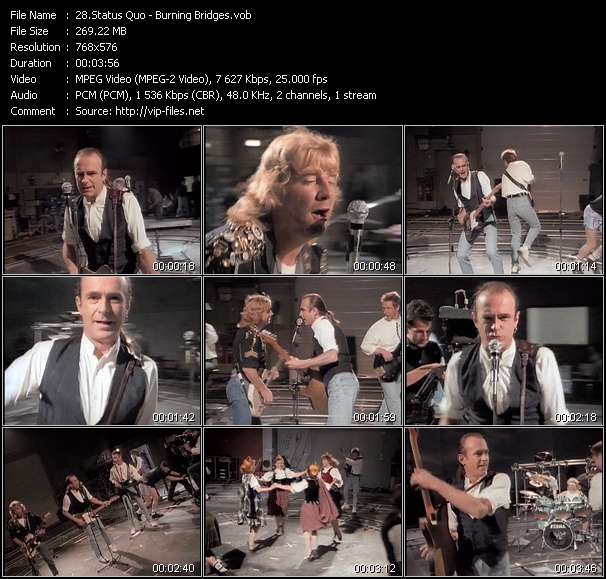 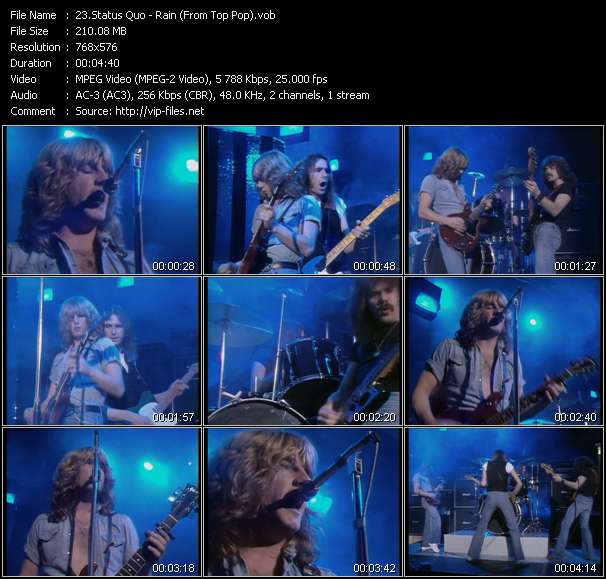 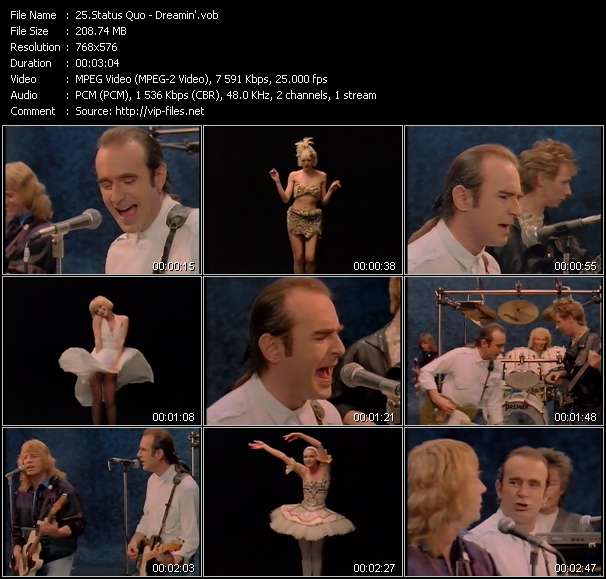 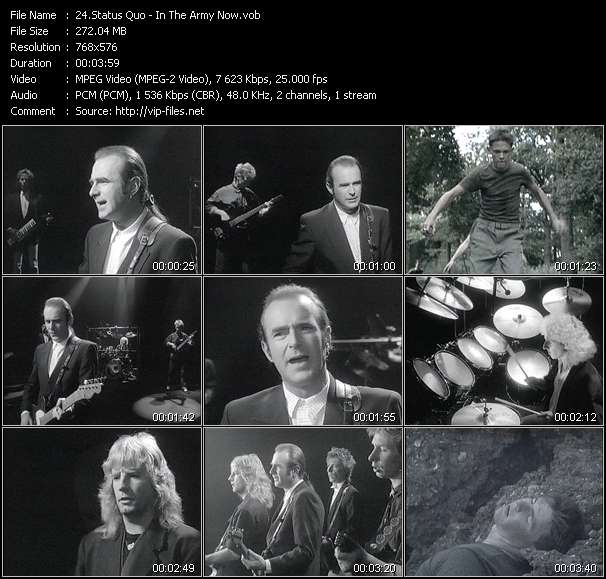 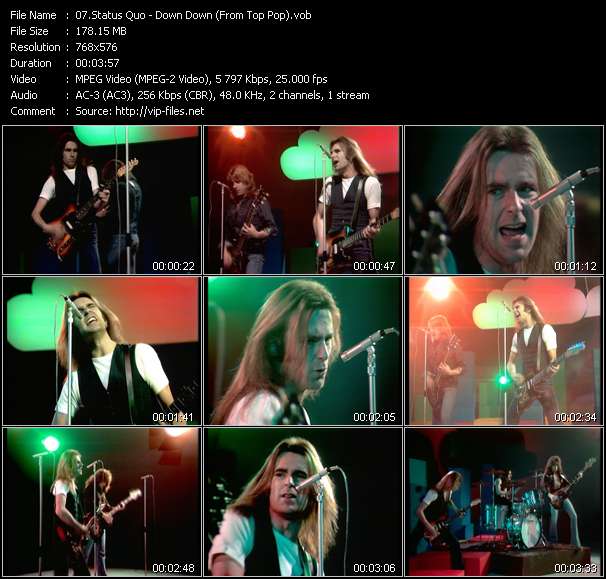 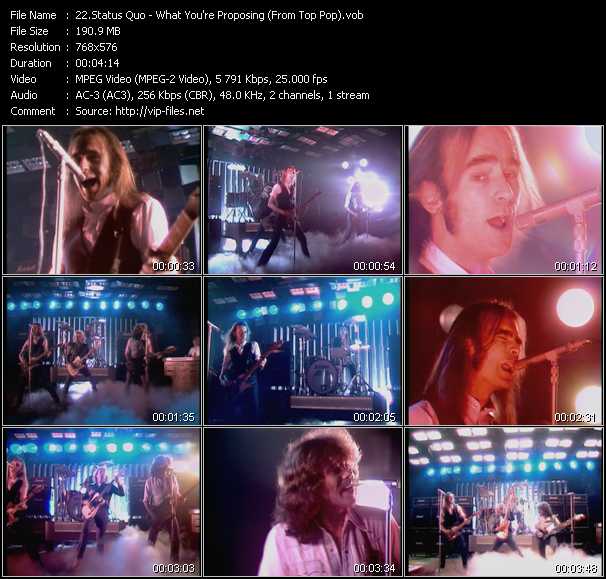 Status Quo music video Down Down (From Top Pop)

Status Quo music video What You're Proposing (From Top Pop)

Status Quo music video Something About You Baby I Like

Status Quo music video Hold You Back (Live At The Birmingham N.E.C. December 1989)

Status Quo music video Rockin' All Over The World

Status Quo are one of Britain's longest-lived bands, staying together for over 40 years. During much of that time, the band was only successful in the U.K., where it racked up a string of Top Ten singles across the decades. In America, the Quo were ignored after they abandoned psychedelia for heavy boogie rock in the early '70s. Before that, the band managed to reach number 12 in the U.S. with the psychedelic classic "Pictures of Matchstick Men" (a Top Ten hit in the U.K.). Following that single, the band suffered a lean period for the next few years, before the bandmembers decided to refashion themselves as a hard rock boogie band in 1970 with their Ma Kelly's Greasy Spoon album. the Quo have basically recycled the same simple boogie on each successive album and single, yet their popularity has never waned in Britain. If anything, their very predictability has ensured the group a large following.The origins of Status Quo lie in a London-based beat group called the Spectres. Francis Rossi (vocals, guitar) and Alan Lancaster (bass) were the core members of the Spectres from their inception; within a few years, the band had added drummer John Coughlan and organist Roy Lynes. the Spectres released three unsuccessful singles before changing their style to psychedelia and adopting the name Traffic Jam and releasing the unsuccessful single "Almost But Not Quite There." After it flopped, the group added Rick Parfitt (guitar, vocals), formerly of the cabaret band the Highlights. When Parfitt joined the band in August 1967, the group again changed its name, this time to Status Quo.At first, Status Quo backed British solo artists, including Tommy Quickly, while working on their own material. "Pictures of Matchstick Men," the group's debut single, was released at the beginning of 1968 and quickly shot to number seven on the U.K. charts; within a few months, it was a number 12 in the U.S. as well. The immediate follow-up single, "Black Veils of Melancholy," was a flop, but "Ice in the Sun," written by former British pop star Marty Wilde, became Status Quo's second Top Ten hit in the fall of 1968. Over in America, the single barely registered, squeaking to number 70; it was the last time the group would ever chart in the U.S. For the next year, Status Quo tried to replicate the success of their first two singles with similar psychedelic material, but they had little luck. Finally, they revamped their sound ( and jettisoned organist Lynes ) in the summer of 1970, debuting their new heavy, bluesy boogie rock with the single "Down the Dustpipe." The single reached number 12, yet the full-fledged hard rock album Ma Kelly's Greasy Spoon didn't gain much attention. Status Quo began playing concerts regularly across England, slowly building up a strong following in England. Following well-received sets at 1972's Reading and Great Western festivals, the band became a hot property. the Quo signed with Vertigo Records and their first single for the label, "Paper Plane," cracked the Top Ten in early 1973, while their first album for Vertigo, Piledriver, reached number five. Later that year, Hello entered the charts at number one, while its accompanying single, "Caroline," reached number five. Also in 1973, keyboardist Andy Bown, formerly of the Herd and Judas Jump, became the band's unofficial keyboardist.Throughout the '70s, each album Status Quo released went into the Top Five, while their singles ( including the number one "Down Down" (1974), "Roll Over Lay Down" (1975), "Rain" (1976), "Wild Side of Life" (1976), and a cover of John Fogerty's "Rockin' All Over the World" (1977) ) consistently hit the Top Ten and frequently went gold. Since they were experiencing a great deal of success, they didn't change their sound at all, they just kept churning out the same heavy boogie. America basically ignored Status Quo, yet their eponymous album managed to chart at 148 in 1976. Nevertheless, they were an English phenomenon, and England continued to support them even when pop music was undergoing drastic changes in the late '70s. Following the release of 1980's Just Supposin', drummer John Coughlan left the band in 1981 to form his own group, Diesel. Former Original Mirrors drummer Pete Kircher replaced him; his first appearance with the group was 1982's Never Too Late. During the early '80s, tensions escalated between bassist Lancaster and guitarists Rossi and Parfitt, who were the group's main songwriters. Lancaster left the Quo after performing with them for a final time at Live Aid. He subsequently took Rossi and Parfitt to court to prevent them from using the name "Status Quo." Lancaster lost his battle, and the name became the property of the guitarists.Once the lawsuit was settled, Rossi and Parfitt assembled a new band, hiring bassist John Edwards, drummer Jeff Rich, and keyboardist Andy Bown, who officially became a member of the group. The new lineup continued Status Quo's remarkable success, as they racked up a number of new Top Ten singles and hit albums, as well as consistently selling out concerts across England and Europe. In 1994, the group had its second number one hit of its career, with the football anthem "Come on You Reds"; the single was recorded with the football champions, Manchester United. By the mid-'90s, Status Quo had scored 50 British hit singles, which was a greater number than any other band in rock & roll history. In April 1997 Parfitt underwent quadruple heart bypass surgery but fully recovered and continued performing and recording with the Quo in the years to follow. Drummer Rich departed the band in 2000, replaced by Matt Letley, who has continued on with the band in the 21st century. The single “Jam Side Down” was a Top 20 hit in the U.K. during 2002, a year that also saw the release of the critically acclaimed Heavy Traffic album. The all-covers outing Don’t Stop arrived in 2004, followed by The Party Ain’t Over Yet in 2005 and In Search of the Fourth Chord in 2007.